I spent the early years of my Christian life with a somewhat deficient understanding of the Gospel.  My perspective was almost singularly focused on the reality that Jesus died for my sins and my wrongs were forgiven.  Praise God—that is true! But in a sense that is only half the Gospel.

Yes, Jesus died to forgive us, but what about his resurrection?  Yes, our old life has been removed, but what about our new life? Is the resurrection just the cherry on top, Jesus’ final miracle to prove he is the Savior?  This is desperately short-sighted! The resurrection works in conjunction with the atoning death of Christ to accomplish our salvation.

The beautiful Gospel truth is that our old life has died with Christ and we have been raised up, born again, to a new life by his resurrection.  It is crucial that we appreciate, celebrate, and live in the dual reality of Christ’s work – his death and his resurrection is what saves us.

That’s why it is helpful to think about the Gospel as an ellipse, not a circle.  A circle has only one focus, one centerpiece; an ellipse has two foci. The Gospel is an ellipse with the foci of Jesus’ death & resurrection.

“Although in his death we have an effectual completion of salvation, because by it we are reconciled to God, satisfaction is given to his justice, the curse is removed, and the penalty paid – still it is not by his death, but by his resurrection, that we are said to be begotten again to a living hope (1 Peter 1:3) – because, as he, by rising again, became victorious over death, so the victory of our faith consists only in his resurrection…By his death sin was taken away, by his resurrection righteousness was renewed and restored…Our salvation may be thus divided between the death and the resurrection of Christ; by the former sin was abolished and death annihilated; by the latter righteousness was restored and life revived” (Institutes II:16:13).

In Romans 6, the apostle Paul unpacks the reality that our old self has died with Christ and we have been raised with Christ to walk in new life.  And, in Galatians 2:20, Paul reflects on the dual nature of Christ’s saving work in an intensely personal way:

This Gospel is not just good news for unbelievers, but for believers as well.  This is not just a Gospel you believe to be saved and then forget. We need a Savior the first day we believe, the day that we die, and every day in between.  This Gospel is our life. 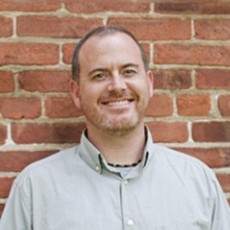 Previous
The Gift of Prophecy Today
Next
The Least of the Saints
Today Youth Group
May 21 Service Project –…
Loading Comments...